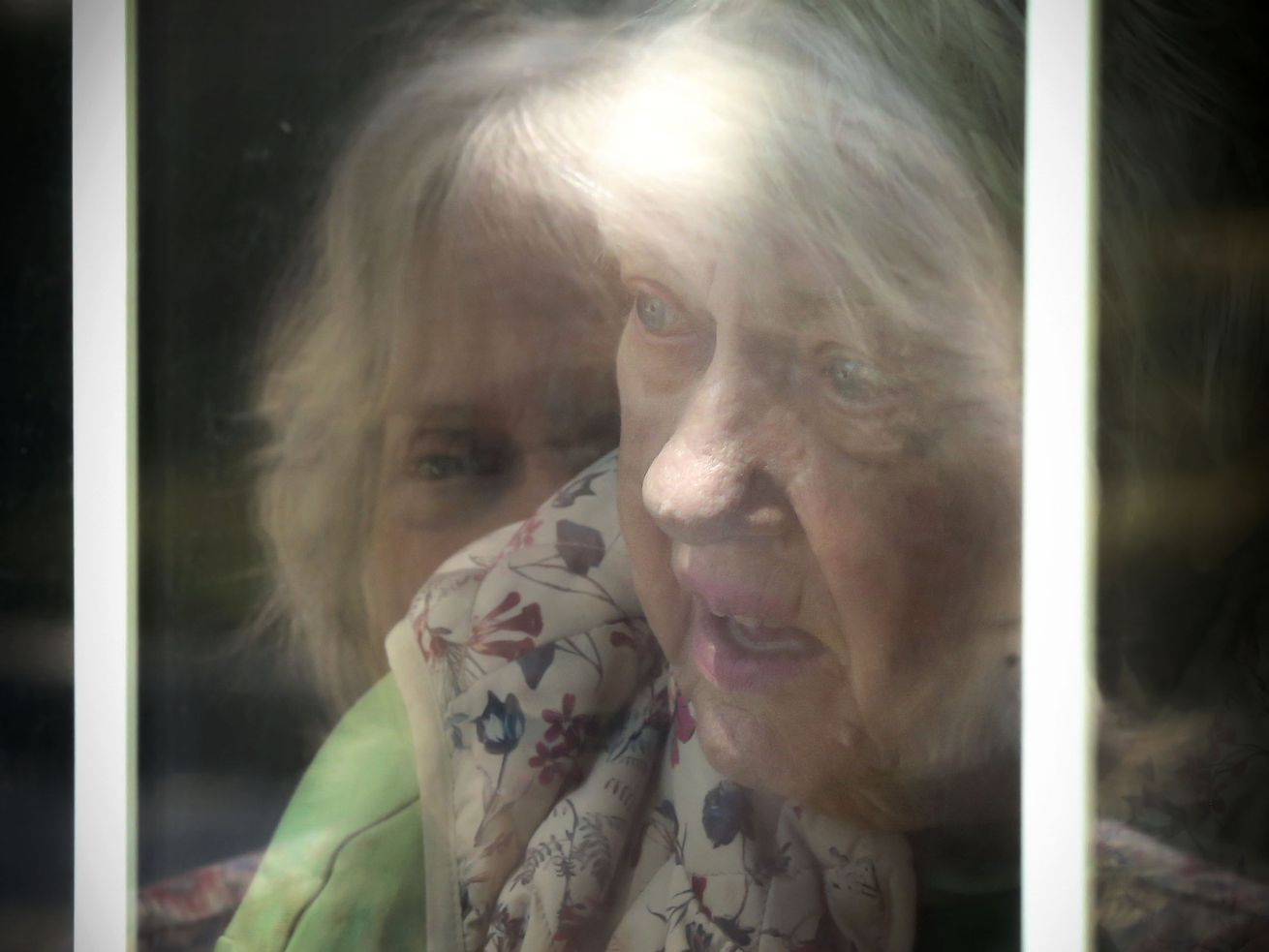 Loneliness has serious health ramifications for older adults, but so does COVID-19

SALT LAKE CITY — Nancy Nelson is pretty sure her dad gave in to loneliness and stopped fighting. Richard Mueller, 93, had been without visits from family members for nearly a month when he died April 10, as care facilities barred visitors in response to the pandemic.

She had formed the habit of calling and asking someone on the facility’s staff to hand her dad his cellphone, usually stowed out of reach on a nightstand.

“We would talk, probably every other day,” said Nelson, who described her father as increasingly sad with the isolation imposed to protect him and other older adults from the novel coronavirus. Advanced age poses serious risk of severe illness and even death from COVID-19.

He was crying, she said.

The world has a great deal still to learn about COVID-19, the respiratory infection that’s forced millions to self-isolate. But it was clear very early that the illness caused by the SARS-CoV-2 virus takes an especially steep toll on those 60 and older, compared to the average younger person without a complicating factor like diabetes or heart disease. COVID-19 has been referred to cruelly as a “boomer remover.”

So older adults have been sternly warned to isolate. In most families, adult children are staying physically distant from their parents and making sure youngsters — seldom seriously harmed by the disease but probably able to spread it — don’t get too close. Facilities, from clinics and hospitals to senior residential living communities and nursing homes, have banned visitors outright.

That means the research on keeping older people safe from this coronavirus butts heads with decades of knowledge about loneliness.

Isolation creates many health issues, increasing both anxiety and depression, Dr. Gail Saltz, associate professor of psychiatry at New York-Presbyterian Hospital’s Weill Cornell School of Medicine, told the Deseret News. “Loneliness definitely affects immunity, it affects the cardiovascular system. One can become physically ill from ongoing, intense feelings of loneliness. So it’s important to reach out to older people and connect with them and help them to stay connected to others,” Saltz warned.

Many older adults already live alone, having survived the death of a spouse and perhaps many friends, too. Mueller’s wife of more than half a century had died nearly a decade before.

He’d spent half the time since in assisted living, making new friends and forming a different kind of community that included visits with his children and grandchildren. But a kidney infection disrupted his life and he was hospitalized first, then sent to rehabilitation twice. Christmas was discouraging. It wasn’t long after that when visits were cut off due to COVID-19, so he felt it keenly.

So did his daughter. The little girl who used to sit by his side and put carbon paper between the sheets of the forms he used in his accounting practice had grown into a woman who took him to his doctor appointments and clipped his nails and loved to hug and kiss and joke with him. When the pandemic locked him away, she begged the care center to let her bring a ladder and climb the four or five feet to his balcony so she could stand outside the glass door and just look at him.

“You could wheel his bed over by the glass,” she wheedled. “They’d tell me they‘d check” with someone in facility administration, but it didn’t happen. And it was hard to wrangle the technology for FaceTime visits, since staff was busy and her dad was increasingly frail.

“He was tired of trying and what’s the point,” Nelson said sadly.

Then he was gone.

Not everyone who is isolated feels lonely, said Linda S. Edelman, associate professor at the University of Utah College of Nursing. It is also true that people can be surrounded by others and feel intense loneliness.

But few doubt COVID-19 has increased both isolation and loneliness for older adults, including those who like Mueller found new friends in assisted living or other congregate settings. Nationwide, face-to-face interaction in such settings is limited to staff who might bring meals or check vital signs, but might not stay long because of increased workloads and a realistic fear of passing on undiagnosed illness.

Nor is COVID-induced loneliness solely an institutional issue. Older adults living on their own in the community have no staff, just sometimes-harried adult kids and grandkids who are trying to be present while maintaining a physical distance to protect their loneliest family members from a potential killer.

Edelman thinks social distancing has perhaps been especially hard on older adults who live independently, but are sociable and used to getting in their cars and going places if they want. “They are being asked to not be independent, but to be lonely and bored,” she said.

“What I am afraid COVID is doing is taking that majority of older adults who are not isolated and not lonely and moving them into that very vulnerable group that is both,” Edelman said. “Isolated and lonely is a terrible place to be.”

Is the cure as bad as the condition society’s trying to protect older adults from? In cases where people lose their will to live, it could be.

“I don’t think we will actually know until the pandemic’s over,” Edelman said.

Here’s what we know about loneliness:

Loneliness has been compared to smoking, obesity, heart disease, physical inactivity and air pollution for the toll it takes on human health.

After writing the book Loneliness: Human Nature and the Need for Social Connection,” science writer William Patrick and the late John T. Cacioppo, then-director of the University of Chicago Center for Cognitive and Social Neuroscience, spoke at length with the Deseret News for a series on loneliness. They called loneliness a prompt, “like hunger, thirst or physical pain to motivate us to renew the connections we need to survive and prosper.”

Patrick called being with others a human need: “Being isolated, having connections frayed or severed, is the scariest thing there is. That’s why the most severe punishment, short of capital punishment, is solitary confinement.”

How much people suffer from being isolated is partly determined by genetics, but the physical and psychological impact is still quantifiable, they said. Loneliness depresses the immune system, hampers sleep quality and contributes to impulsive behavior and substance abuse. It may be a factor in dementia. Loneliness can change gene expression and rev up inflammation. It may change the body’s response to bacteria, viruses and glucose. Stress becomes less manageable; fatigue may grow.

“There are real consequences to balance with the need to stop COVID-19,” Edelman said.

One reason people choose assisted living when they get older is to have friends to share meals with. COVID has closed literal doors on some of those connections. But technology can help people who are living in isolation mere feet from each other to reach out and be together, too. The trick is, some folks need help figuring how to use those tools — and staff may already be hard-pressed to meet more basic needs without spending a lot of time setting up technology.

Even so, a lot of care facilities are trying to get more tablets so residents can reach people they know, Edelman said.

Many older adults are both fairly tech savvy and well-equipped. For others, it didn’t seem particularly useful until the pandemic. Families figured out they needed technology about the time they weren’t allowed in to set it up.

He has visited with groups of older adults at Wasatch Front residential communities for years, answering their questions about current events and helping them stay tethered to the broader world many of them seldom venture into any more. Recently, as communities have locked down, he’s been visiting via Zoom. It’s bittersweet, he said, to watch residents wave to each other through their computer screens. Though they’re in the same building, they are separated as if continents and oceans were between them.

He’s noticed fewer participate, perhaps in part because some do find technology difficult. But he’s fearful it may be more than that. “Depression and loneliness are apparent, discernible not just in their behavior, but even in their questions,” said Chambless, who also teaches at the U.’s Osher Lifelong Learning Institute.

COVID has contributed “to greater loneliness, detachment, isolation, sadness. It’s painful. End of life care is often tough anyway. This terrible virus pandemic COVID-19 has really contributed to a number of new factors that we have to deal with,” he said.

“For seniors, this is a real negative for the most part. They are trying to use modern technology, but it contributes to a sense of existential loneliness. It seems to me they’re shutting down and I don’t want them to shut down. They’re withdrawing.”

Exercise by Zoom is not the same as working out with a friend, but it’s better than not exercising because you’re lonely and sad. Technology can aid mindfulness practices, known to reduce stress and anxiety.

“The issue is, all of that takes time for the staff and they are more busy than ever,” said Edelman.

Shantel McBride, a chaplain with Steward Health Care and for Good Shepherd Hospice, said the pandemic has shown how hard it is to use technology as a substitute for hands-on events. One draw of community living for older adults has been group activities like bingo or little trips offsite — which all went away with isolation.

She had hoped to restore some of the sense of fun through activities like virtual bingo, online. But streaming group activities into rooms on a large scale has been more challenging than expected, she said.

Families can be creative about getting together with older relatives, McBride said. She and her sister had lunch with their parents the other day — each household in a separate car parked a car-width or more apart, the windows rolled down while they ate and talked. Her mom is a cancer survivor; her dad fell after a knee replacement and is still pretty weak. They aren’t taking any chances.

While they’re not wavering on social distancing, McBride said some facilities are finding balance between safety and meeting emotional needs.

A local nursing home recently let her in to offer a friend’s mother-in-law an end-of-life blessing.

At nearly any moment, McBride can name people grieving the death of loved ones or loss of homes, of belongings, of lifestyle. The grief has been complicated by the inability to hold normal funerals and observe even small rituals associated with drawing close and then letting go a little bit, she said.

McBride figures when we’re all finally able to hug again, we won’t want to let go.

Even the caregivers are grieving right now, hurt by the need to enforce painful rules.

But while the virus has battered communities, it hasn’t broken spirits or stolen all hope. People are crafting work-arounds.

While obeying visiting restrictions, Tim and Cathy Chambless still regularly visit his aunt Nita and uncle George Lutes, 91 and 83, respectively. The Lutes have been married 42 years and moved here a couple of years ago from Pasadena, California, where their careers at NASA JLP gave them roles in America’s 1960s race to the moon. They’re together in assisted living in Millcreek, isolated, but not as much as they would be if they didn’t have each other. Most of their neighbors have lost their spouses.

Their group visit requires technology, but it’s the human part that makes them feel happy. They hold their cellphones and chat. Then Tim and Cathy Chambless wave and beam smiles through the window that separates them. And George and Nita Lutes catch those smiles and return them through the glass.