Enjoy yours eggs exactly at nature intended this Easter. There's no call for the gaudily wrapped chocolate jobs when you can choose those from ostriches, quail and even swan, should Her Majesty allow, says Adam Edwards

Easter should be a time to enjoy eggs exactly as nature intended – not the commercialised chocolate creations favoured by a certain rabbit. The choice of best luxury eggs is unlimited, insists Adam Edwards. Perhaps you will favour the golden yolks from free-range hens or ostrich eggs enormous enough to make 100 meringues. Here are the best from the nest for Easter – but does the nest belong to a penguin, or even a swan?

If you like the sound of an egg not made from chocolate this Easter, try our recipe for pheasant scotch quails eggs. Alternatively our recipe for a chocolate, ginger and orange easter cake is ideal for traditionalists in need of cocoa.

The most exclusive egg to be eaten in Britain on Easter morning will not, I believe, be a limited edition, celebrity-endorsed, foil-wrapped confectionary oval from the nearest supermarket. Nor will it be an organic chocolate egg from Harrods, a duck egg from an MP’s “Stockholm” duck house in Hampshire or even a quail’s egg from Quayles in Tetbury. Rather, it will be an egg laid by one of Lucy Riley’s hens and boiled for five-and-a-half minutes in newly drawn water. Lucy’s free range eggs come from her golden-brown chickens that scratch about in Ablington in Gloucestershire’s Coln Valley. The egg will be, I can assure you, as fresh as a young lover, the yolk running coquettishly from its soft-boiled centre. The albumen will be white, while the shell, softly burnished by straw and mud, will be testament to its landed roots.

But what makes it more popular than other eggs lies not just in its fine digestibility but also in its scarcity – it is as rare as a hen’s impacted incisor.

From now until late autumn, only approximately four dozen of the Cotswold schoolmistresses’ eggs will be on offer each week in the Ox House Wine Bar in Northleach. Locals can buy them, when available, at a pound for half a dozen. The well-heeled imbibers at the bar could, if they so wished, invest in an alternative to Lucy’s eggs. On a window shelf above the wooden cases of claret sits another collection of poultry mother lode. They, too, are fresh free-range hens’ eggs (produced by a local “good lifer”) that also cost a pound for half a dozen. Furthermore, they are larger. But there lies the rub. “A connoisseur will always buy Lucy’s eggs,” the urbane barman at the Ox House assured me. “They are better coloured, thicker shelled and are less ostentatious.”

Egg snobbery, I now realise, is rife in the UK. It was not so long ago that the egg was unassuming nutrition. It carried its humble moniker as readily as any pie or abode. It was a dull comestible that for decades was known to city dwellers as a product from a battery hen that came in white and, a generation later, brown. We went to work on it, dunked soldiers in it and hard-boiled it for picnics. And occasionally, on high days and holidays, we used it as a garnish. At best it was offered as an hors-d’œuvre or savoury; usually it was a last-minute stand-by but never the focal point, except at Easter. Then we celebrated it in chocolate with a foil-wrapped hollow sphere that failed on every count. The packaging promised a chocolate feast but by the time the cardboard was discarded and the coloured foil removed, all that remained was a bald, brown, imprinted oval. 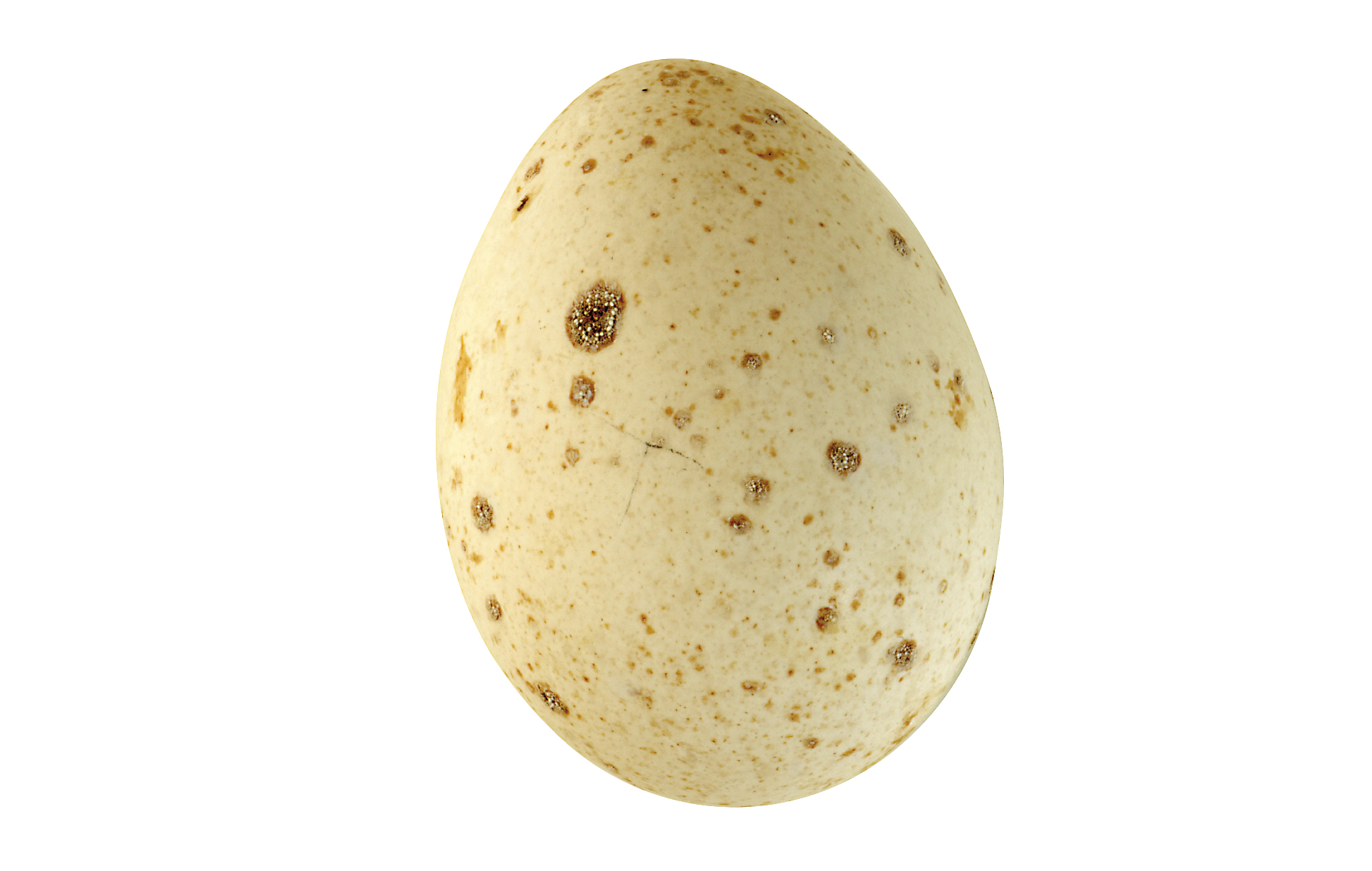 But in the last decade the egg has shed its self-deprecating tag and the chic ellipsoid has been hatched. The luxury free-range egg has started to be eaten in all the right circles. The Prince of Wales, for example, chooses between seven locally produced free-range organic eggs placed before him by his flunkeys, according to Jeremy Paxman’s 2006 book On Royalty, while Hello reports Liz Hurley to be a terrific fusspot about the quality of her morning free-range boiled eggs. On the other hand, the gardening writer and bon viveur Roddy Llewellyn, who was recently described in print as “an all-round good egg”, swears by a fresh bantam egg for his breakfast. Nowadays, connoisseurs can choose from a wide selection of chickens from, for example, Burford Browns or Black Rocks. The health conscious can insist on an egg “naturally rich in Omega-3 from hens fed a vegetarian diet”. Other epicures are in a quandary over the comparable merits of Waitrose’s Columbian Blacktail free-range eggs (kept on the organic pastures of family-run farms) and Sainsbury’s free-range eggs gathered from hens that live in “woodland-ranging areas”. The former may be organic but the latter has a touch of noblesse oblige about it as a penny of its price goes towards charity (to plant more trees and educate children about the environment).

Meanwhile, egg specialist Clarence Court, which supplies Harrods and celebrity chefs including Jamie Oliver, produces Old Cotswold Legbar eggs. For the gourmand who is particular about his egg’s lineage the company has installed a live “hen cam” site where anyone connected to the internet can see his Legbars scratching about the grass day and night, all year round. However, it is not just the hen’s egg that is making the grade nowadays. Black-headed gulls’ eggs, which are available in April and May, are also modish. They cost up to £5 each at restaurants such as Boisdale, Le Gavroche, The Ivy and Le Caprice as well as being popular in St James’s clubs. “The eggs are growing in popularity,” said Steve Downey whose company Chef Direct supplies three-quarters of the 40,000 seagulls’ eggs sold annually in the UK. “How many we get varies each season – there are only about 25 people who are licensed to collect the eggs – but the eggs are always going to sell well.” 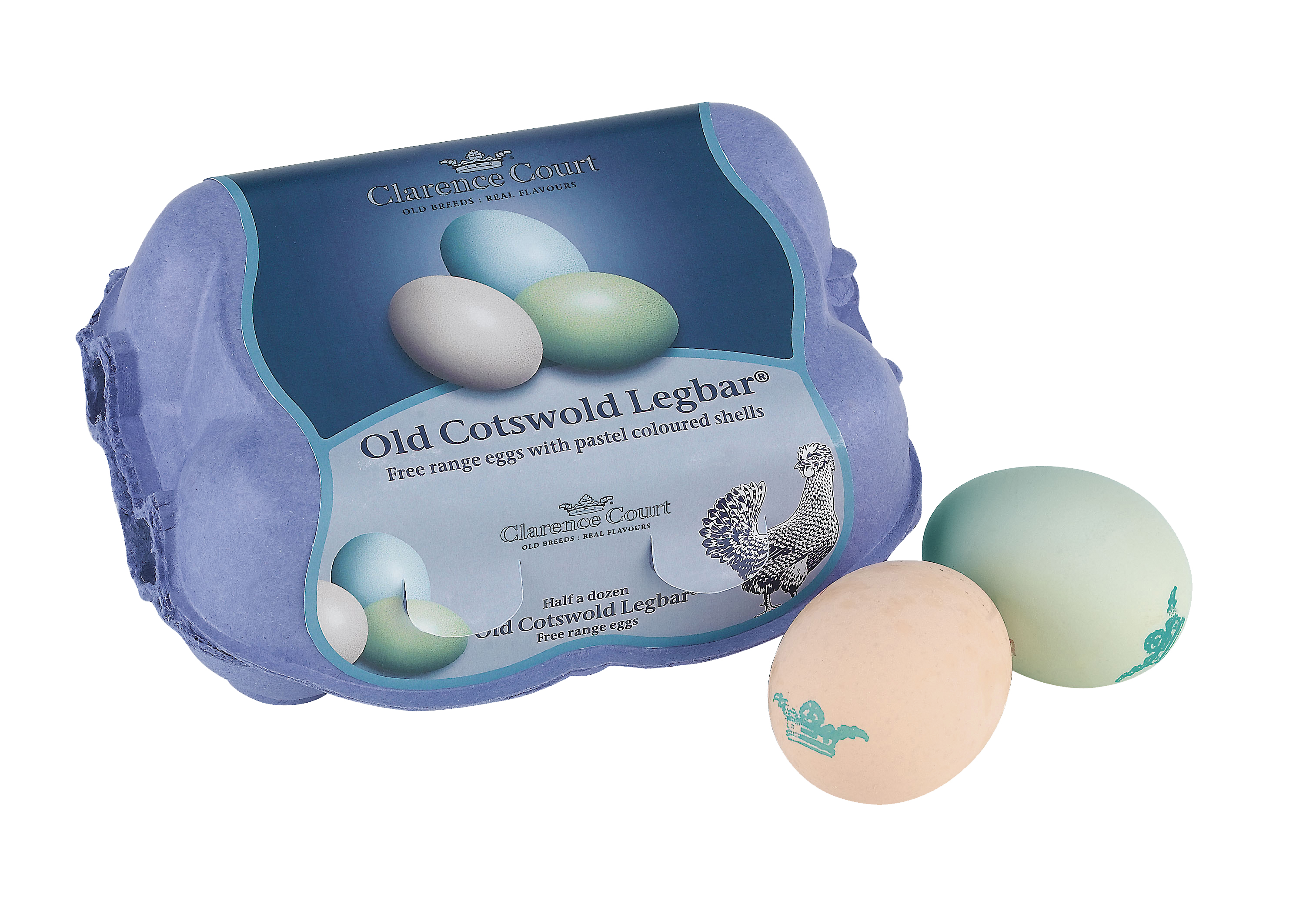 Goose eggs are equally fashionable. Last year, Norfolk Geese, the country’s largest gosling hatchery, reported that more and more of its customers were keeping back birds for spring egg production (the eggs are available only from mid-February to July). “We’ve seen a gradual increase in farmers producing goose eggs,” said Eddie Hegarty, partner of Norfolk Geese and vice-chairman of British Goose Producers. “From Cornwall to Essex, there are producers looking to increase availability of the eggs. They are fantastic in an omelette, with a rich colour and gorgeous taste, and are best cooked with a little cream, a few onions and cheese.” The pretty little dark-speckled quail’s egg started to grow in popularity with the yuppies in the Eighties. In the past decade, however, it has become a popular drinks party nibble – an aristocratic shelled nugget of goodness that is best dipped in celery salt. “They are renowned for their light texture and softly coloured yolk encased in a delicate shell,” boasts a spokesman for Clarence Court. 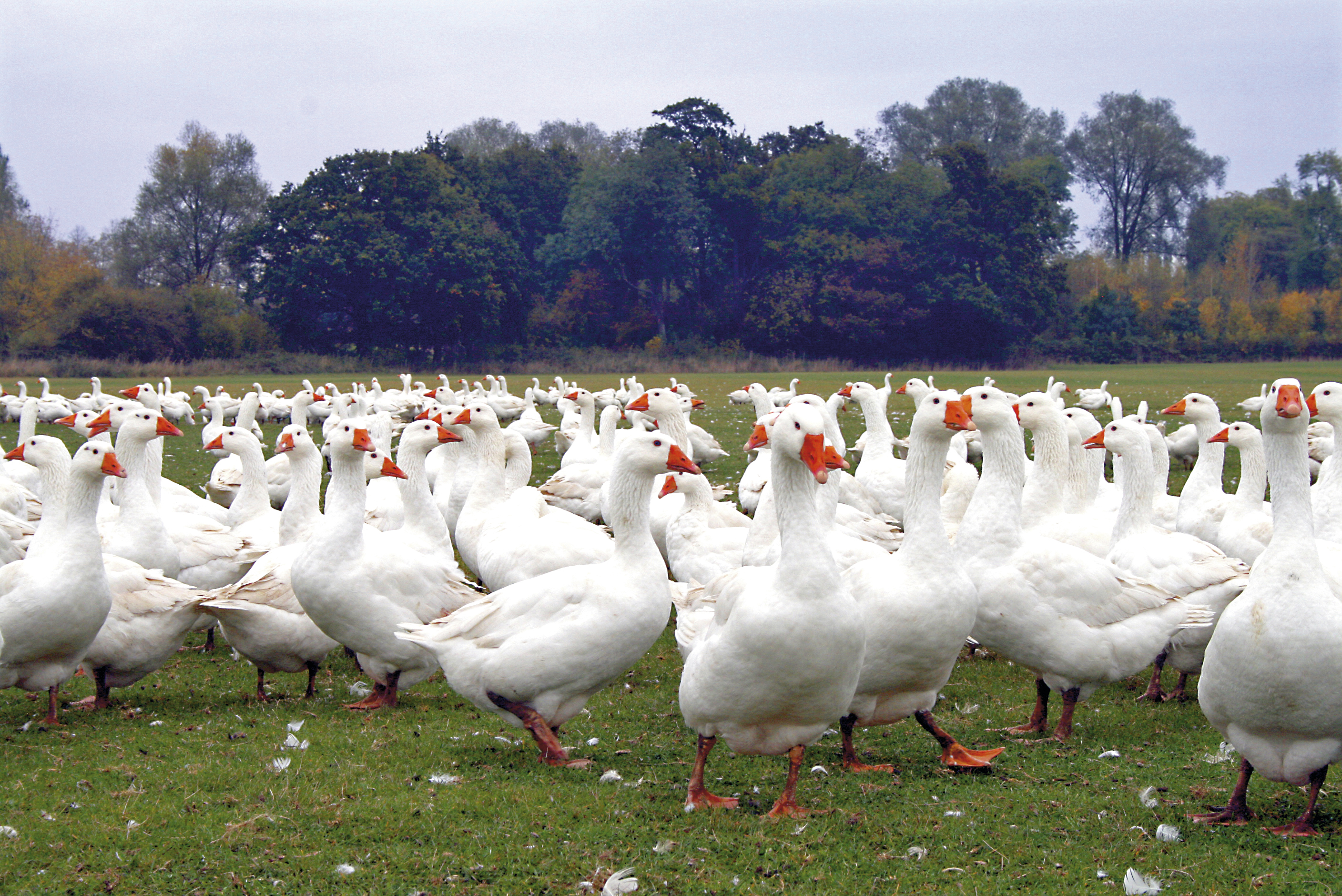 A gaggle of geese, a bird of birds who are also layers of luxury eggs.

Competition comes from the common pheasant with an egg that is anything but proletarian. It is khaki in colour and a couple of sizes up from the quail’s egg. “A stunning soft white egg with a creamy yolk”, said one critic who had feasted on the pheasant’s offering at Berkshire’s Pot Kiln gastro-pub. “We serve them for about 60 days a year in April and May,” said the pub’s legendary chef Mike Robinson, who  has previously written The Field’s cookery column. “We serve them as a starter with Marmite soldiers, and sometimes we offer them with wild boar ham and chips. Local keepers supply us. They choose the eggs with double yolks and other slight flaws, eggs that would not hatch successfully. The pheasant egg is the perfect culinary egg and it is becoming more and more popular.” Duck eggs are also increasingly fashionable. “In the last few years, supermarkets have started to sell them,” said producer Linda Dick, who has around 200 of the webbed creatures – mostly white hybrids with Peking and Aylesbury in their backgrounds. “They are more delicious than hens’ eggs – they make extremely good scrambled eggs and are wonderful for baking. A sponge cake made with duck eggs has to be tried to be believed.” Last year, ostrich eggs went on sale at Waitrose priced at £16 each. They are approximately 24 times the size of a hen’s egg, weigh around 3lb and take an hour and a half to hard-boil. In fact, one egg is enough to make a hundred meringues or 32 souffles. “Ostrich eggs work very well in omelettes,” said Waitrose egg buyer Frances Westerman. “We’ve seen the growing popularity of duck, goose and pheasant eggs – now it is the turn of the ostrich egg to take off.” That may be a bit optimistic. My friend Rowley Leigh, the chef proprietor at London’s fashionable Le Café Anglais, tried an ostrich egg and while he said it tasted very much like a normal egg he suggested it was more of a novelty than a delicacy. “It would go nicely with caviar,” he said. “It tastes creamy and rich but I wouldn’t want to eat a lot of it. Apart from anything else, it is a very large quantity of food and is not particularly practical for families.” 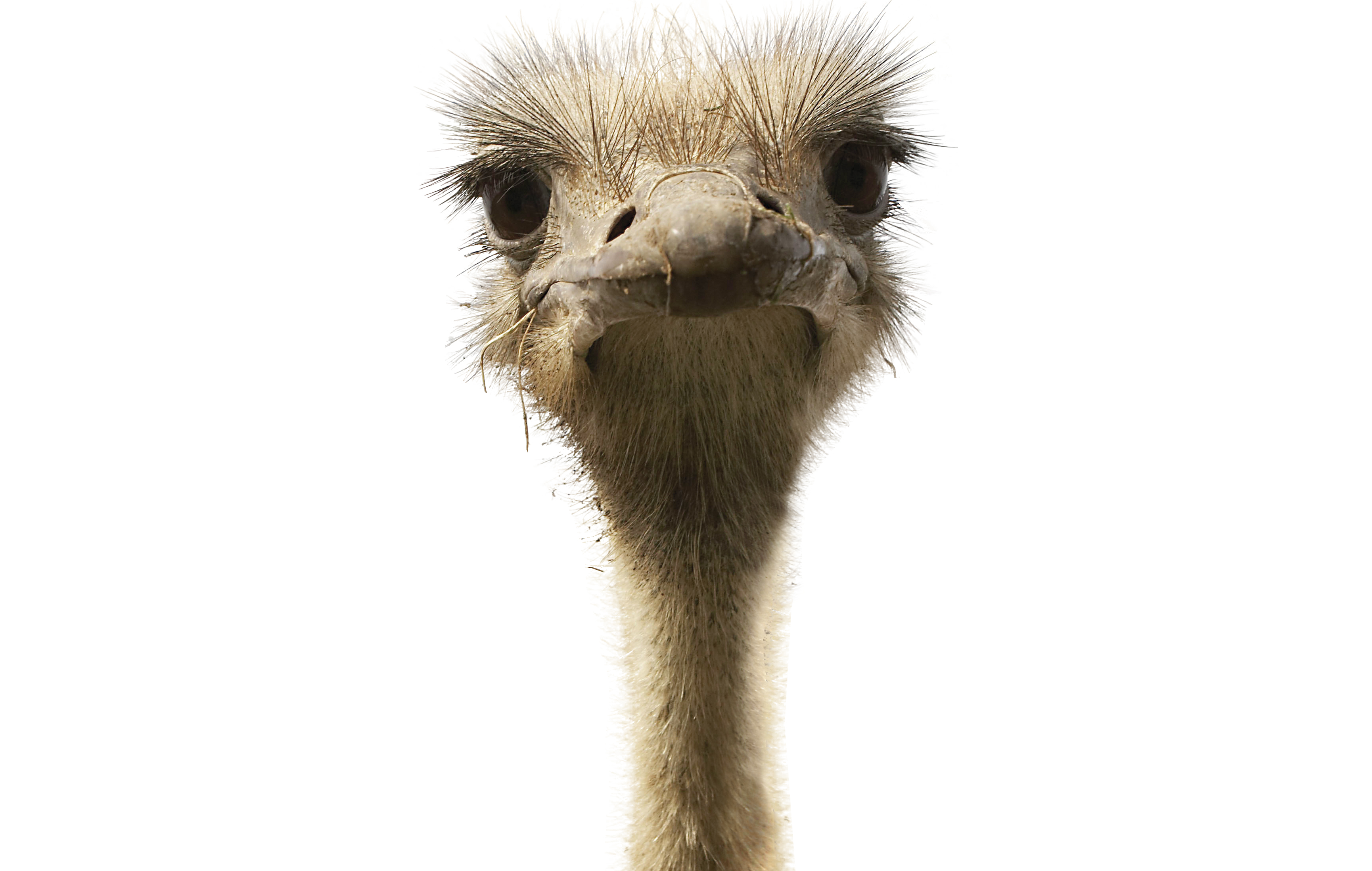 There are, of course, many other eggs that are delicious – from pigeon’s and plover’s to penguin’s (not that I know anyone who has tried the latter). The Guild of Food Writers spends much of its correspondence on the merits of these various edible ovals. It discusses guineafowl eggs (“much esteemed”), turkey eggs (“though large they are more delicate in flavour”) and worries about, for example, how to make tofu from a one thousand-year-old Chinese egg or the pros and cons of Heston Blumenthal’s bacon-and-egg ice-cream. In fact, one member, the writer Derek Cooper, called his book Snail Eggs and Samphire.

CREAM OF THE CROP

But there remains one egg that has yet to make its mark on the smart gastronomic set. It is the one sphere of glorious goodness upon which the modern foodies have yet to gorge – the egg of the swan. It was once served in grand medieval houses – swan itself being the regular roast for high days and holidays – and even as late as the Thirties it was considered to be something of a delicacy. “Only those from a young bird should be used,” writes Florence White in her 1932 book Good Things in England. “They are much more delicate than their size might suppose. And when boiled hard and shelled their appearance is beautiful, the white being of remarkable purity and transparency.” However, until the day that I can tuck into the fruit of one of Her Majesty’s or Charlotte Townshend’s birds – and I have a feeling that it might be some time – I shall stick to what I know to be the grandest egg in the country, namely a Lucy Riley egg. 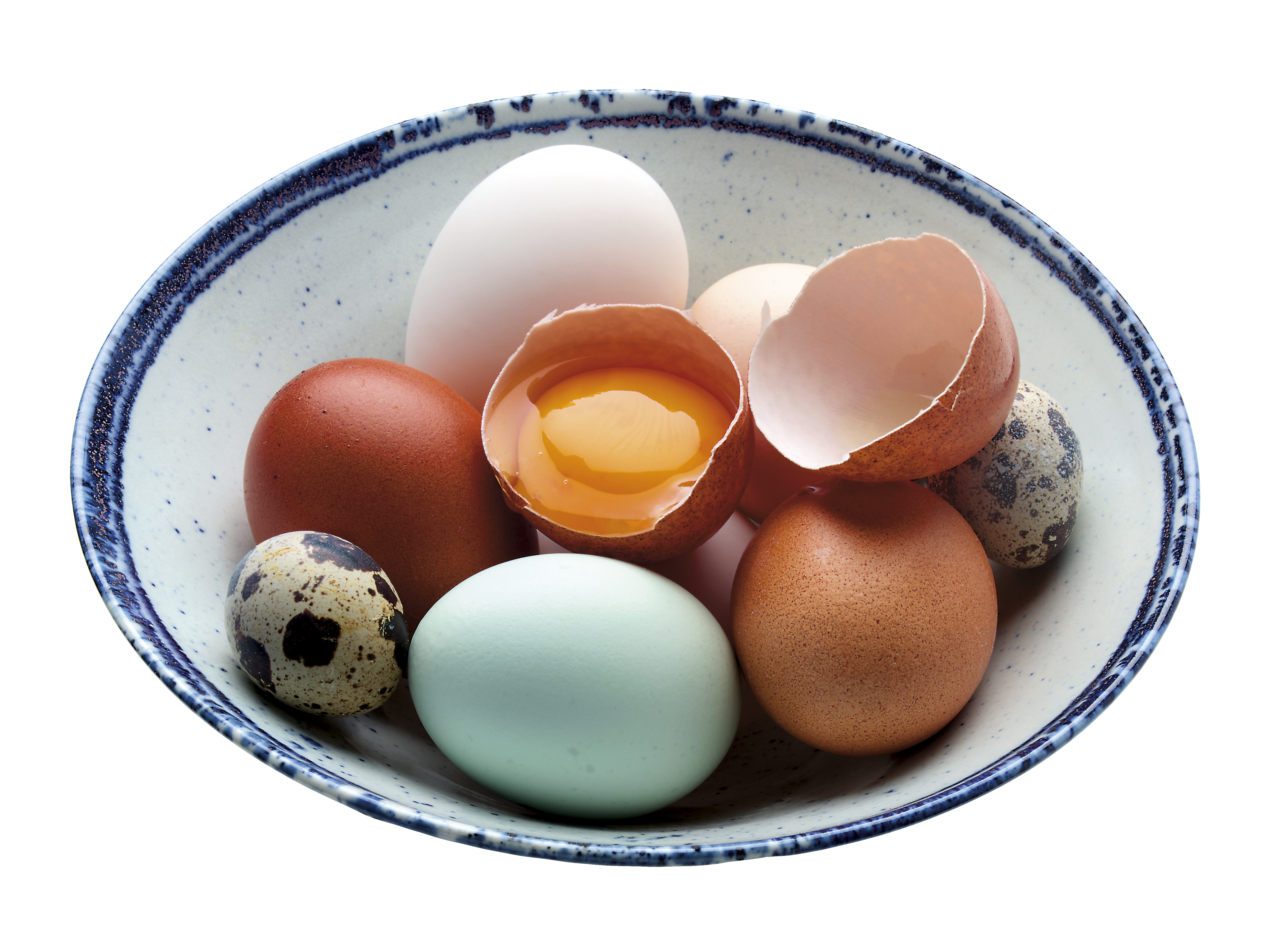