The first signs of the disease that would take my dad’s life were unassuming. Towards the end of 2018, he was slower on his morning walks with my mom. Raking the leaves fatigued him faster than usual. He had difficulty lifting heavier objects. Of course, being my dad, he simply shrugged it off and said he needed new shoes. Yet these small symptoms quickly snowballed. By December, he no longer had the coordination to drive a car. His arms and legs rapidly lost muscle mass. Walking became dangerous, and he started falling without warning.

In January 2019, after ruling out all other options, doctors diagnosed my dad with amyotrophic lateral sclerosis, or ALS. An insidious disease, ALS causes the death of motor neurons that govern muscle movement. For my dad, the progression of the disease was quick and brutal. Within a few months, he lost the ability to eat, drink, move, and breathe on his own. It was like watching someone being ripped out of the world, piece by piece. His condition became so dire that he entered in-home hospice care in April, his viewpoint limited to the living room windows. On September 3, 2019, my dad passed away at the age of 70.

Trying to process my dad’s sudden decline and death has been the hardest thing I have ever dealt with (although grappling with COVID-19 comes in at a close second). I have found that grief makes me feel small, as if I’m being crushed down. Life on planet grief is claustrophobic, its atmospheric pressure, unbearable. As a bonafide book nerd, it isn’t surprising that I sought refuge in books. However, what is surprising is the genre that has helped the most: popular cosmology.

Cosmologists study the origins and development of the universe. Writers of popular cosmology gear their research for a general audience. The genre came into its own in the late 20th century, with works like Steven Weinberg’s The First Three Minutes: A Modern View of the Origin of the Universe, Carl Sagan’s book and TV series Cosmos, and Stephen Hawking’s A Brief History of Time. If you enjoy pondering the universe, but fail at mathematics as I do, do yourself a favor and read a popular cosmology book or two. The truly great writers of the genre know how to place the conceptual fireworks upfront, while sweeping the labyrinthine equations under the space-time rug. 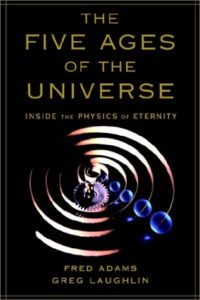 My journey with popular cosmology began around the time of my father’s death. I had been reading Isaac Asimov’s Foundation series, his tales of galactic conquest and ruin that span millennia. Thinking about immense gulfs of time led me to Fred Adams and Gregory P. Laughlin’s The Five Ages of the Universe, an epic account of how the universe will age. They take their reader out to 10^100 years (that’s a 1 with 100 zeros after it!), and that future is very cold and dark. The universe continues to expand, ordinary matter dissolves into a soup of elementary particles, and the energy level of the universe falls to near absolute zero. It is truly the mother of anticlimactic endings.

So you might be wondering: how could reading about the heat death of the universe possibly be comforting? Fair question! Yet strangely enough, The Five Ages of the Universe was exactly what I needed. Adams and Laughlin broke open my cramped quarters of grief, thus holding me up to the immense vistas of existence. Their book read like a cosmic breath of fresh air, and allowed my ball of pain to unfold onto something larger than me. Grief had closed me in, and what I needed were the expansive reaches of time and space.

Since then, I’ve hit the popular cosmology train pretty hard. Some highlights have been J. Richard Gott’s The Cosmic Web: Mysterious Architecture of the Universe, which reveals how the universe exhibits a sponge-like structure with clusters of galaxies connected by immense galactic filaments. Tom Siegfried’s The Number of the Heavens is a fast-paced account of the multiverse: the controversial, mind-bending idea of parallel universes. And finally, in Black Hole Blues and Other Songs from Outer Space, Janna Levin recounts the fascinating history of the search for gravitational waves and how they reveal crucial information about the extremely early universe.

I have found that the darkest, tightest corners of grief are the ones from which it seems impossible to emerge. You fall into them unexpectedly, and all of a sudden the loss is new and raw again. You begin to wonder if you will ever be okay. Certainly, popular cosmology is not a cure for these moments. In fact, it wasn’t actually written or intended for these purposes! Yet reading it has shown me that nothing can ever remain the same. The history of the universe is one of change. While that’s not a promise that things will get better soon, it is certainly a guarantee that the darkest moments of grief will end and something different will take its place. And sometimes just knowing that can help you make it through.