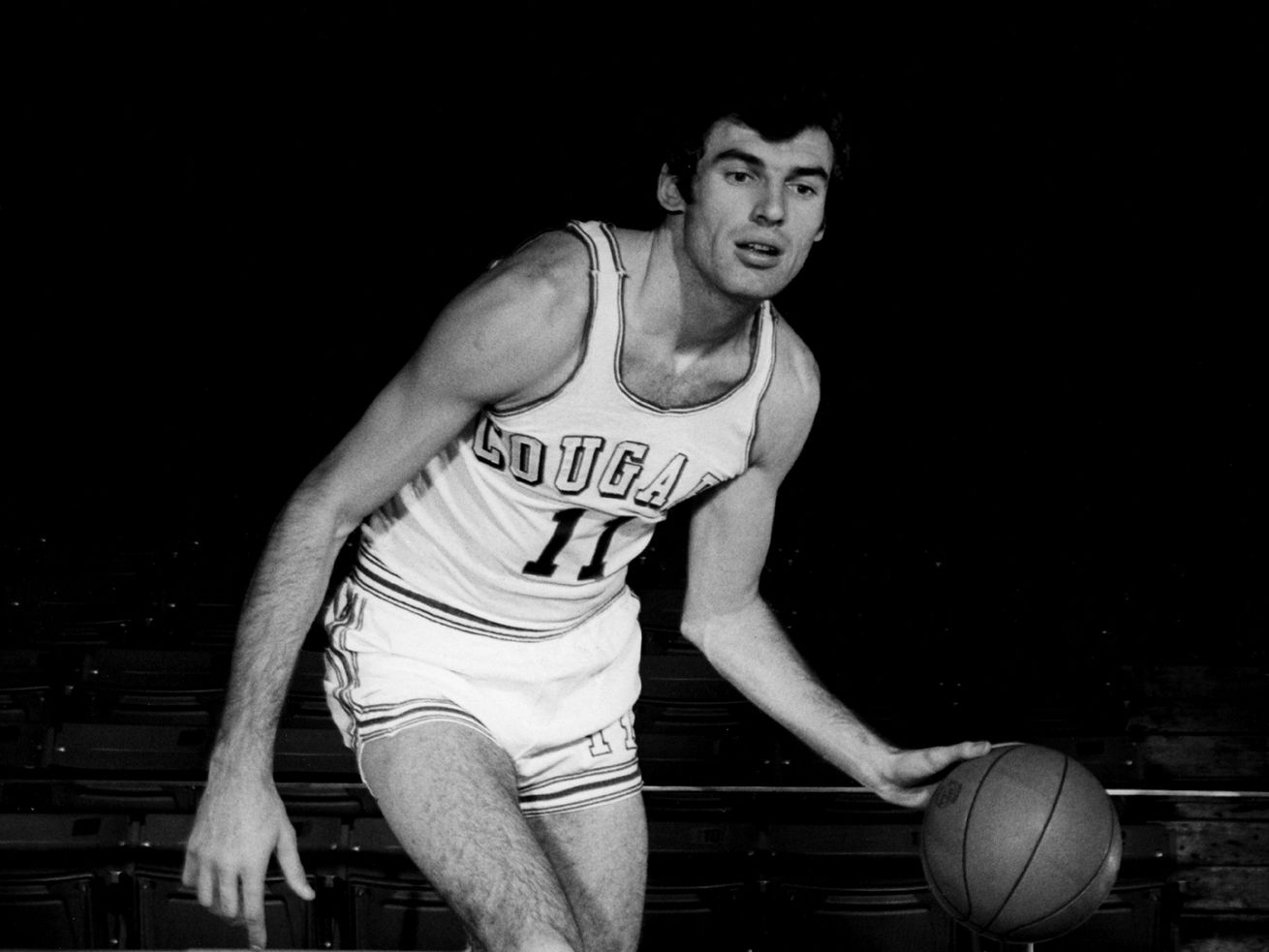 Kresimir Cosic, the legendary Yugoslavian basketball star, opened the door for other European players to come to the NCAA and NBA and went from atheist to man of great faith

PROVO — Doug Richards describes former teammate Kresimir Cosic as an erudite Simon, a knowledge sponge. His mastery of basketball was a case in point, but so was religion when the atheist decided to investigate the mysteries of faith.

Cosic came to BYU from a life in a godless environment, a theological wasteland of communist rule in Yugoslavia. He smoked, drank wine at night, and as the star of his national team, was the object of fan worship that stroked his young ego. After Zadar wins there were dancing celebrations, nobody went to work the next day and the hangover of victories lasted days.

During his sophomore year at BYU, Cosic was homesick, postgame celebrations were light fare. After summer, when he led his Yugoslavian national team to a gold medal in the World Championships, he returned to Provo, not quite committed to his new environs.

One night he decided to pack his bags and leave BYU. He told Christina Nibley, a friend who was dating a Croatian tennis player at BYU, he was going to call a cab, get to the airport and fly home.

Three hours later, he came back and told Christina he wasn’t going to leave, that he knew there was a reason he needed to be there. In the course of hours, his demeanor had completely changed from homesickness to excitement. Something came over him, said Christina.

In a book by Beverly Campbell on Cosic, Christina explains that night and how Cosic couldn’t stop talking about his life, childhood and his anxiousness to fulfill a vision he had as a kid:

“As he talked, he paced in front of the couch where I sat. He was now having a dialogue with himself, responding to his own questions now viewed from the perspective of a spiritual plan. (Of course! That makes sense! Of course, that’s it!) His hands gestured wildly, his face glowed with the increasing knowledge that answers for his questions were within his grasp and that there was an important reason for his coming here.”

“I could never do justice to his eloquence, his intensity, the electric energy with which he filled the room. In the past 40 years whenever I’ve tried to expain it, I’ve simply stated that I watched Kreso convert himself. Not even my father, (Hugh Nibley) converted him; he only confirmed what Kreso already knew. But I always knew that on that day I had witnessed a transformation and I knew it was something glorious.”

Cosic’s only exposure to religion was the memory of his grandmother, who’d set aside an area of her home for prayers. Cosic met with Christina’s father, BYU professor Hugh Nibley, who just happened to be a master of explaining the bridge between theology and atheism; the meaning and importance of ancient scripture and the struggle of natural men to run away from spiritual life. After many meetings and discussions, Cosic felt something stir inside him, a different way of looking at life, a maturity and humility separate from being a superstar.

The late Nibley, author, lecturer and teacher, was known on faculty as a kind of BYU Yoda before that character ever made the silver screen.

Cosic also began talking to the late Truman Madsen, a philosopher and professor known for his eloquence in speaking of spiritual things.

Cosic had run into two of the biggest sluggers of religion on campus to discuss God. By his junior year, his entire outlook on life and his role in it changed.

“Within my heart there began to burn familiarities — feelings that I had known as a child,” Cosic later explained. “Those experiences began in my second year (at BYU). Through the process of my conversion, I had been given understanding. My vision was no longer bound by the limitations of mortality.

“While I knew — based upon the Light of Christ and the teachings of my grandparents — that there was more to life than food, drink and vainglory ... spiritual matters had been of little interest to me …

“I realized I was not alone. Our Father in his love for us had never intended us to be alone.”

Cosic made an athletic rebound with his spiritual awakening. His attitude changed. His faith grew. One day in his junior season he called coach Glenn Potter and told him he would not be at practice. Potter was alarmed and asked why. Cosic said it was personal. When he saw him next, Cosic explained he had been in Salt Lake City and had been baptized by Nibley.

Cosic’s journey to find God wasn’t a stroll but a sprint. Once the door opened, he was racing through hallways, trying every doorknob he could.

Teammate Doug Richards remembers a road trip to Arizona when the players were at the hotel pool, but Cosic was in his room reading religious books. He didn’t just read, he devoured the material, hence Cosic, the erudite. “He was very smart, extremely smart,” said Richards.

“He spoke Croatian and learned English in one semester in the English emersion program at BYU. He could also speak a little Italian, Russian and German. He really was a brilliant young man.”

The next time he returned to Yugoslavia, Cosic packed his bag carefully, hiding religious materials to sneak back to Zadar for studying and to share as he prepared to play on Yugoslavia’s 1992 Olympic team in Munich. This time he wasn’t going home as “Easy Rider,” but a kind of Saul back from the road to Damascus.

The United States defeated the Cosic-led Croatia team for the gold medal in Munich and the silver medalist returned to Zadar for celebrations.

Cosic was slated to return to BYU, but Yugoslavia’s Olympic games started after classes had begun at BYU. The NCAA had a rule that if this was the case, athletes could come back on campus, practice, get room and board, but not have to take classes.

“Our practice began Oct. 15. That week I called Cosic and asked when he was going to arrive and he said he had a big problem,” remembers Potter.

“I asked him what the problem was and he said he couldn’t tell me, but he’d be in Provo in a week.”

A week later there was no Cosic, so Potter called again. “Coach, I have a big problem,” said Cosic, “I can’t tell you until I get to the United States.”

Potter was getting worried. His team was ranked in the preseason top 20 and Sports Illustrated was coming on campus to do some interviews and see the team work out. The magazine people came and Cosic wasn’t there. He didn’t arrive until the first week of November.

Potter wanted to know what in the heck happened.

“Well,” said Cosic, “before the Olympics, our team toured Yugoslavia and put on exhibition games and the players were asked to speak to the crowd after the game. Before one of the games I told the crowd I had a movie to show them.”

Everyone assumed it was a basketball movie. It turned out the movie was a classic of The Church of Jesus Christ of Latter-day Saints in the ’60s and ’70s entitled, “Man’s Search for Happiness.”

The Communist Party was so upset at Cosic that upon returning from Munich they took his passport.

“I asked Cosic why he didn’t tell me that on the phone in October.”

“Coach, they had somebody tailing me day and night. They were monitoring my phone calls.” After 2 1/2 weeks, his passport was returned.

“I didn’t know until after the season Craig Jorgensen ended up rooming with him that senior year. Jorgensen told me the reason nobody wanted to room with Cosic was that he got up at 4:30 or 5 every morning to translate the Book of Mormon in the room. ‘Coach,’ said Jorgensen, ‘He would ask me the meaning of a word and if I didn’t know, I’d just tell him something. So if there are any translations of the Book of Mormon in Croatian that is wrong, it’s my fault.’”

The year prior he was an atheist. Cosic’s conversion became more than an inner experience of self-determination and goals. He found himself a key cog for not only the translation of the Book of Mormon into his native tongue but also became the head of the spear in bringing his newfound faith to the country of his birth.

Next: Cosic’s conflict as star, believer among communists.