In October, I was in New York City for a week with a friend. We are both foodies and one of the things we love to do most when we are in a new city is eating! Something that is not always that easy when you are in a new country and have an extremely sensitive gut. I was positively surprised, however, because it was relatively easy to find places where I could eat good food and I would love to share these places with you. In this blog, I share my tips for eating low FODMAP and gluten-free in New York City!

Do you have celiac disease and are reading this blog?Note that I dont have celiac disease, but I am sensitive to fructans (which are for example found in wheat). Therefore, gluten-free options are often a safe option for me, but I dont have to worry about cross-contamination. Because of that it is important to check with the restaurants that I mention if they know how to serve somebody with celiac disease. In my tips, I mention for every restaurant what my experience is and what I have noticed about the restaurant knowing about cross contamination or not. 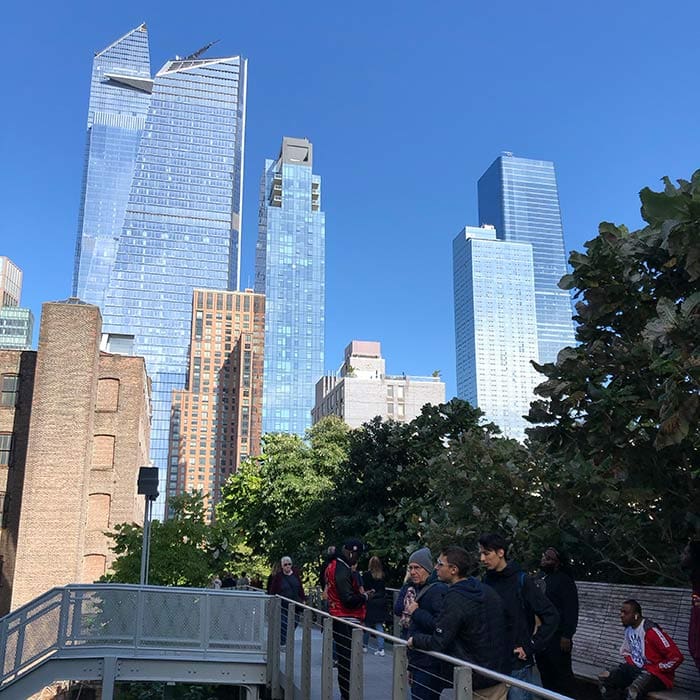 Oatmeals is a tiny oatmeal bar where they serve oatmeal with toppings of your choice. It is like a yoghurt bar, but then with oatmeal. Such a nice concept! You can create your own oatmeal, so it is easy to put a low FODMAP oatmeal together. The oatmeal is made with oats and water, so the base is lactose-free.

Gluten-free?I read on a blog that the oats that they serve here are gluten-free, but I couldnt find this on their menu. It is important to check this with Oatmeals if you have to eat strictly gluten-free. For the low FODMAP diet certified gluten-free oats are not necessary. 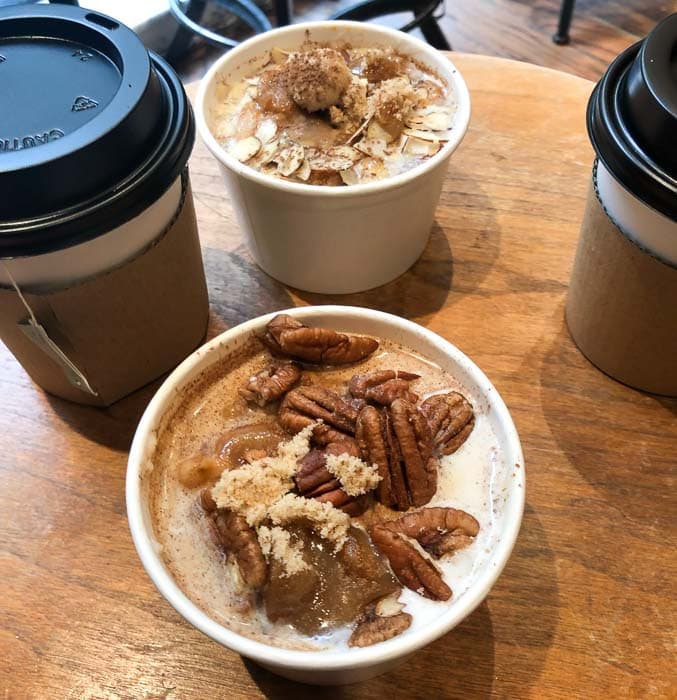 The butchers daughter is a vegan restaurant with 3 locations in NYC. Almost their entire menu can be made gluten-free. They immediately asked me whether I had celiac disease or not, when I ordered a gluten-free option. So they took it seriously.

Note: they often have vegan versions of certain foods in their dishes, such as bacon. At first, I didnt realize this and I ordered a croque madame with bacon. Luckily, I realized soon that the bacon wasnt real bacon and I didnt eat it (because it most likely had ingredients that are not low FODMAP). 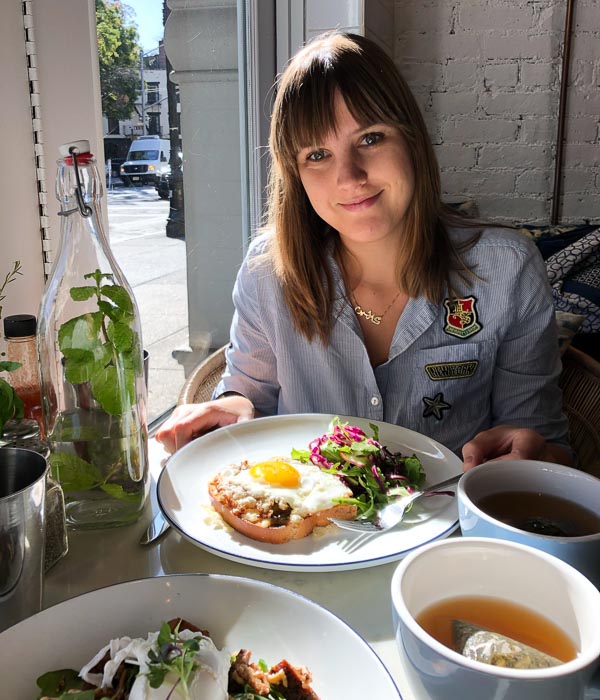 Egg shop is a great brunch place where the serve everything with egg. You order almost everything on gluten-free bread. I ordered Pepper Boy. This included an onion aioli, which I left out of course (onion and garlic in one, the best combination you can think of for a fodmapper, haha).

Gluten-free?Even though, Egg shop has several gluten-free options on their menu, they state that their kitchen is not gluten-free. So this probably means they cannot avoid cross contamination. 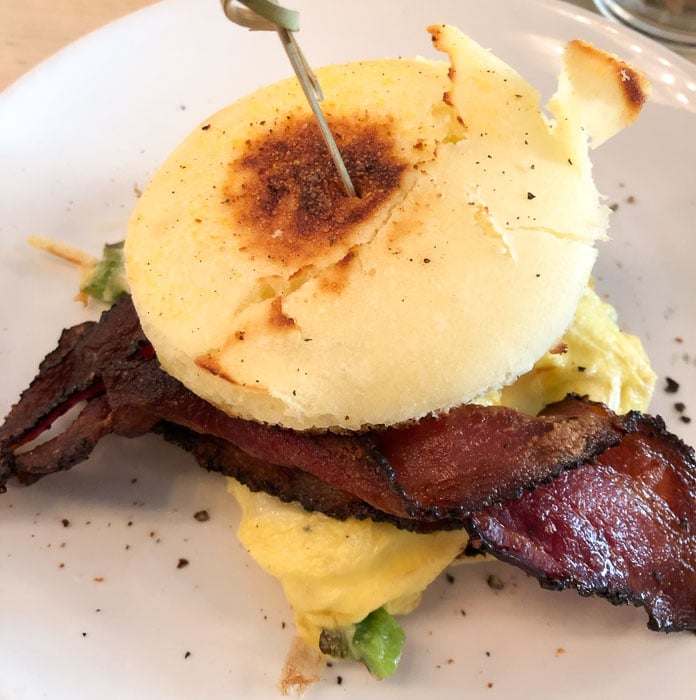 Hotspots for lunch and dinner

Good to know, if you are in the United States / New York City for the first time: it is not usual to make reservations at restaurants in New York. In most cases it is not even possible. New Yorkers just go to a restaurant of their choice in the evening. At the door, they tell you what the waiting time is. Always walk in to give your name to the host/hostess. They will put you on the waiting list, will tell you how long you will have to wait and will call out your name when there is a table for you. If the waiting time is very long, you can also leave to do something else and come back when it is almost your turn.

In the Netherlands, we dont have Shake Shack, but everybody says it is a must try. I heard that they had gluten-free burger buns, so Shake Shack was on my list to try. Honestly: I didnt completely understand the hype. The burger was good, but it was not that good that I am totally crazy about it.

But if you are looking for burgers and fries from a fastfood chain. Shake Shack is definitely a fine option. 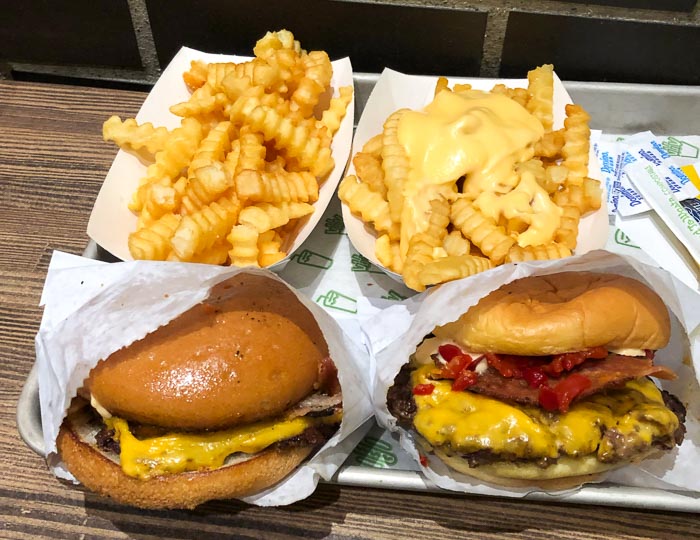 Chipotle is a Mexican fastfood chain where they mainly serve burritos, tacos etc. When I was googling Chipotle FODMAP, I stumbled upon a blog (this one) where they explained exactly what you can eat at Chipotle when you eat low FODMAP. The options are quite limited, but you can eat a simple meal there. Thats what we did one time for lunch.

At Chipotle, you can build your own meal. These are the things that are low FODMAP:

Unfortunately, non of the sauces are low FODMAP, except for a little tabasco (if you tolerate spicy food). I did really like the carnitas, so I still enjoyed my meal. I choose to eat a little guacamole with it and I took a pill with it that helps me to tolerate garlic and onion better. In hindsight, this wasnt such a smart choice because the guacamole really contained a lot of onion and that gave me some stomach issues. You can better leave the guacamole out. Avocado is also only limited low FODMAP. I tolerate a little more, thats why I tried it.

Cross contamination?On their website Chipotle says that you can ask them to change their gloves to prepare your order. They also say that their items that contain corn (corn tortillas and tortilla chips) may contain trace amount of gluten from mingling with gluten containing grains. So you cannot be sure that cross contamination can be avoided.

We went here for a brunch and had blueberry pancakes, but also the savoury things on the menu looked great. I regret that we didnt go back another time for a sandwich with fries. 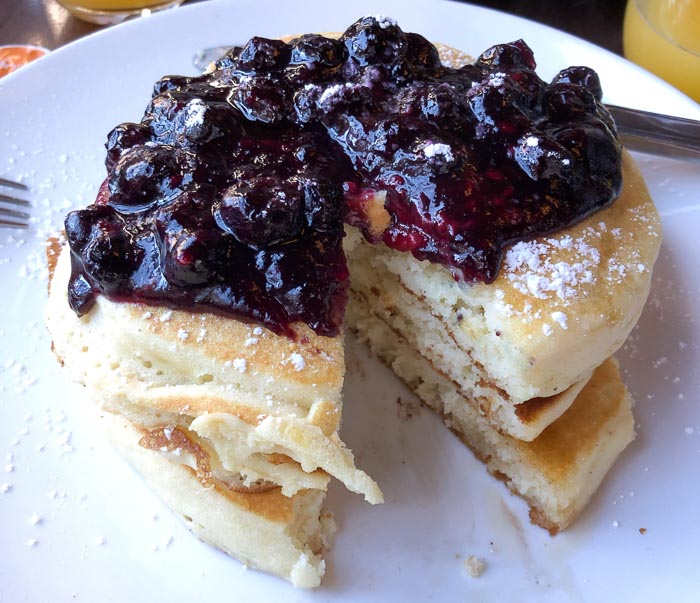 Cross contamination?My bagel was wrapped and was served on a separate plate. I didnt see how they baked the bagels, so I am not sure if they also bake their gluten-free bagels separate from the other bagels. 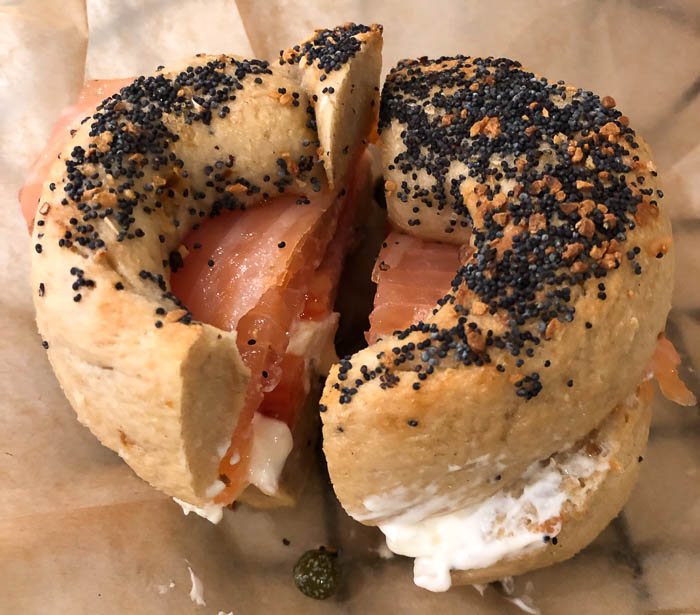 On our first evening, we went to eat sushi at Yasaka. They had great reviews and we felt like eating sushi. I didnt tell them I had any intolerances because I eat sushi quite often and I know what safe choices are for me. There were enough options and we had a great meal.

Gluten-free?If you have to eat strictly gluten-free, I would inform beforehand if they can accommodate for this. 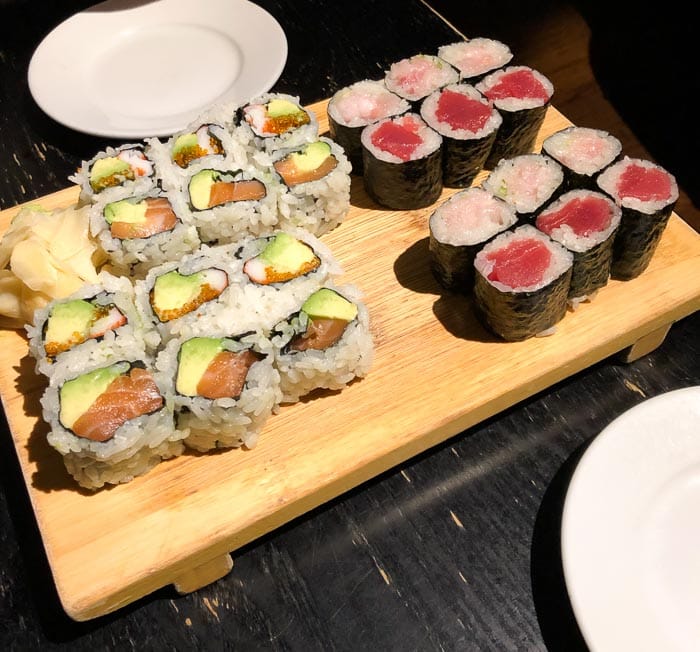 Kest is an Italian pizzeria and has a gluten-free menu. All pizzas can be made gluten-free (for 4 dollars extra). If you choose a low FODMAP topping for your pizza, you have a great low FODMAP pizza. This really was one of the best gluten-free pizzas I ever ate. No hard dry crust or a gluten-free flavour. Just a really good pizza.

Cross contamination?I have not seen how they prepared the gluten-free pizza. Therefore, I would inform beforehand if the can accommodate for people with Celiac disease. 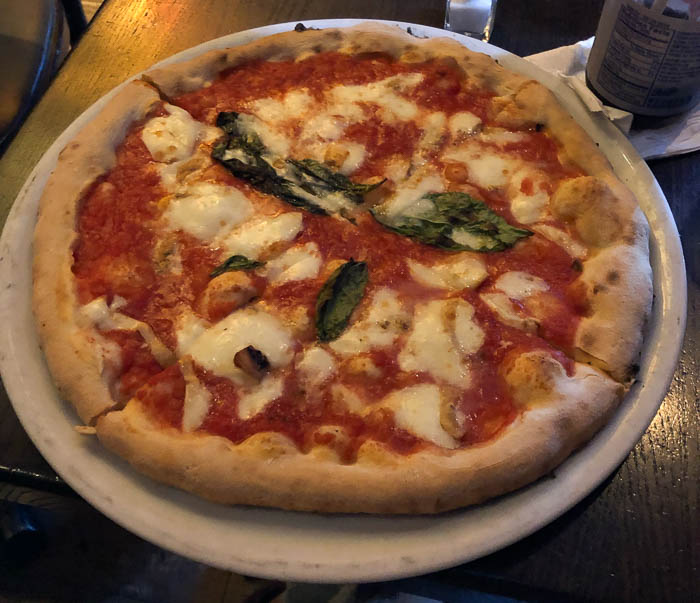 At Pok bar, you can customize your own pok bowl. This is one of the many pok bowl chains in the city and pok bowl is often a good low FODMAP option. Because you can assemble your bowl yourself and pick low FODMAP ingredients. A great and budget friendly dinner option!

Gluten-free?I couldnt find any information about gluten in their products. Many ingredients of a pok bowl are naturally gluten-free, but the question is whether cross contamination is avoided. It is important to check that with them. 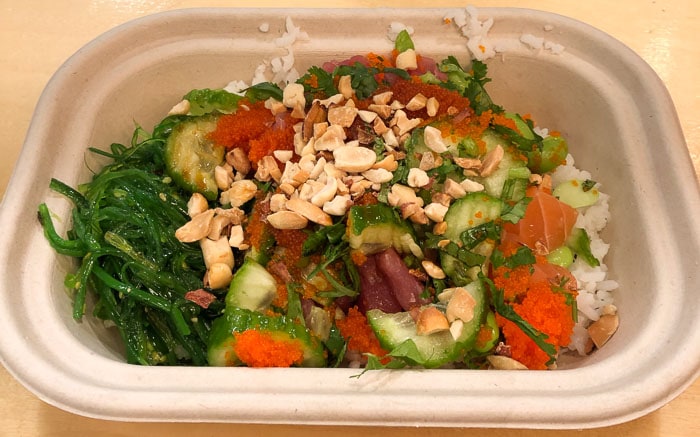 Gluten-free?As far as I found out, they didnt have any gluten-free options here. 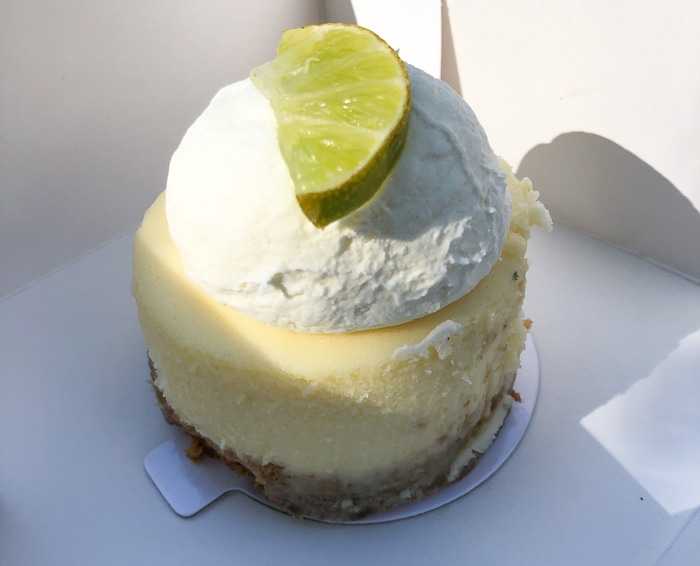 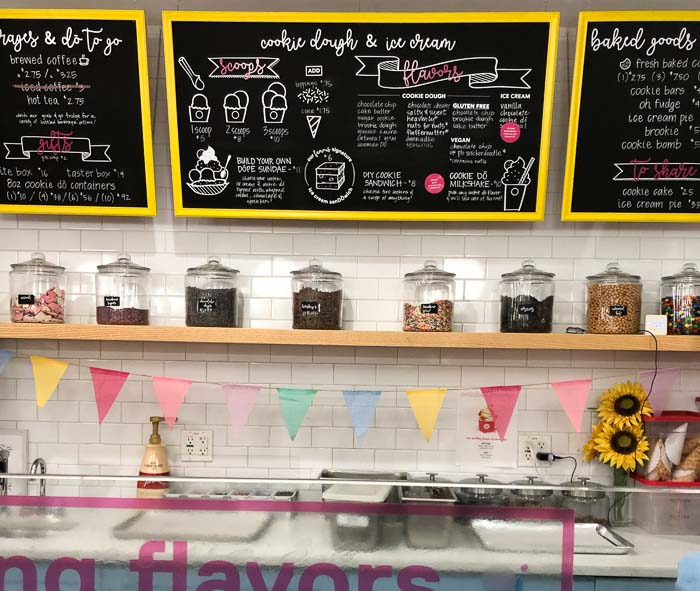 On the Ds website, under flavors, you can see the ingredients of the different options. Cake batter contains quite some lactose (i.e. white chocolate) and peanut butter snickerdoodle contains soy milk, so those are no good low FODMAP options. Signature chocolate chip and brookie dough are low FODMAP (make sure to check the website before you go because ingredients might change). 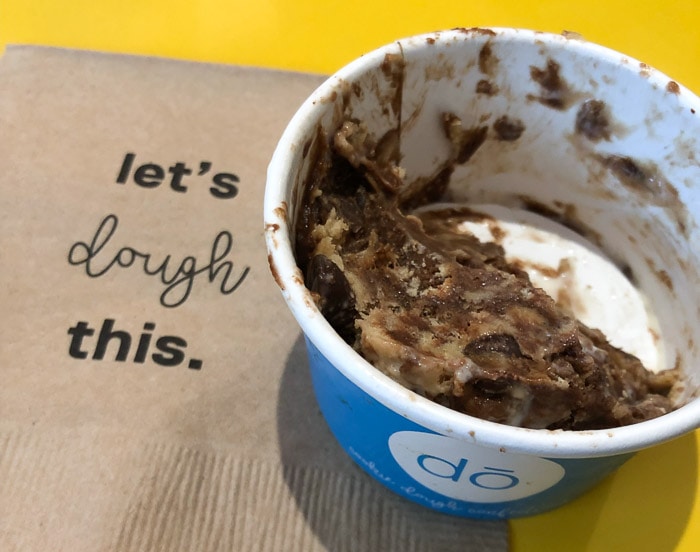 When I am on holiday, I rather dont eat in a restaurant three meals a day. I notice that this is very hard on my stomach and that it gives me complaints more quickly (you have more chances to eat something that is not low FODMAP by accident). Therefore, we choose to eat one meal per day in the hotel. Sometimes this was breakfast, sometimes dinner. We bought something to eat in the supermarket and ate it in the hotel.

I love Whole Foods! You can find this supermarket on several locations in New York City and they have a huge offering. Also many things that are suitable for people with intolerances.

The best is their saladbar, where you can build your own salad. Everything had ingredient carts, so you could see what was low FODMAP or not. We ate a Whole Foods salad for dinner two times and it was delicious. 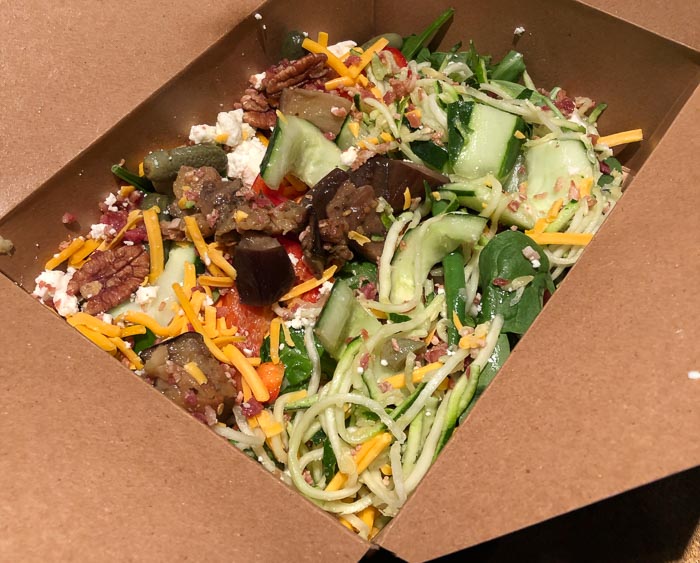 I also bought breakfast in Whole Foods a few times. We bought instant oats with maple syrup and cinnamon. In the hotel we added hot water and topped it with fresh fruit. They also had lactose-free yoghurt and I bought low FODMAP granola. Both fine breakfasts! 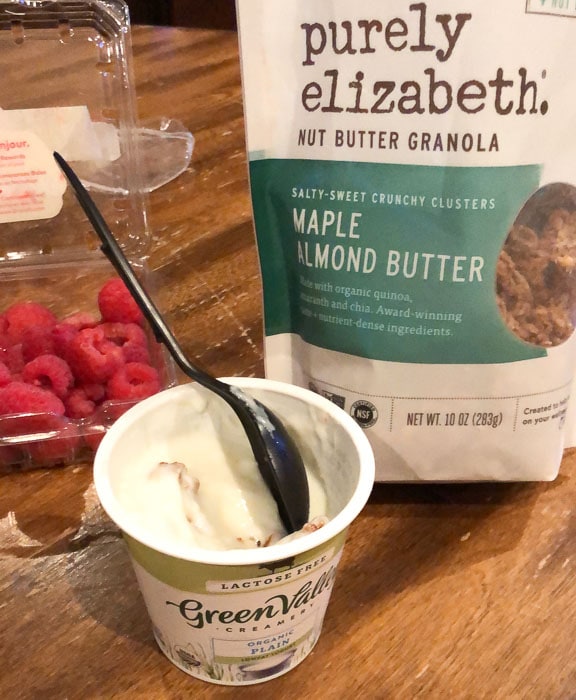 You can also find Trader Joes in several places in New York. Here, they also had a lot of options for people with intolerances. I bought gluten-free wraps here, to take home. They were a bit dry, so not a great succes unfortunately. 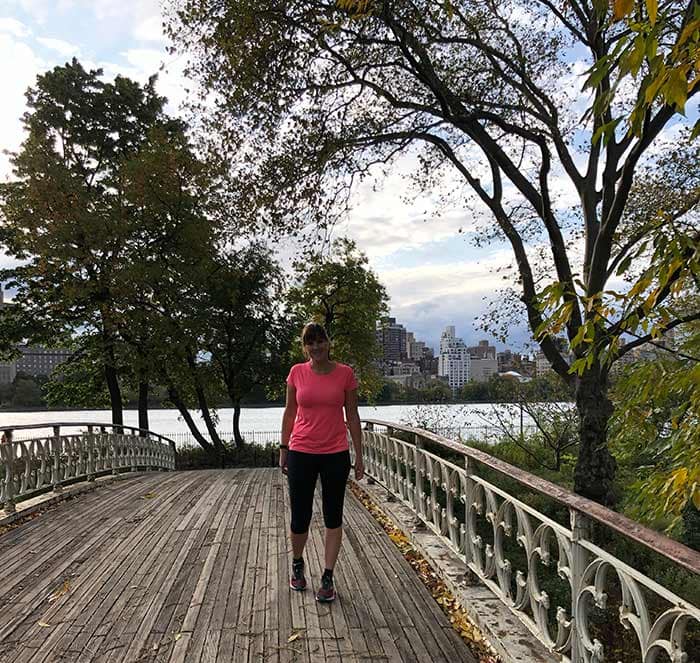 One of my bucket list items: running in Central Park ;)

Have you been to New York? And if yes, do you have any good tips for eating low FODMAP and gluten-free in New York City? Let me know in the comments below!